Volkwagen’s Chattanooga plant is the company’s only facility in the world that is not represented on the Volkwagen Global Group Works Council, the powerful body of employee leaders from around the world. 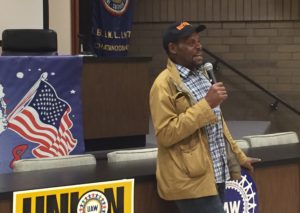 “I believe in the idea that worker representation is important and a viable and essential concept,” Glover told the Chattanooga Times Free Press before meeting with Local 42 members.

Glover, a longtime labor supporter, has been working on a feature film in Atlanta and readily accepted an invitation by Local 42 to visit Chattanooga.

Unions have “been a part of my life,” Glover told the newspaper. Best known for his role in the “Lethal Weapon” films, Glover has been a union member as an actor and his parents were in the U.S. Postal Service union. “I believe in the idea of representation and collective bargaining,” he said.