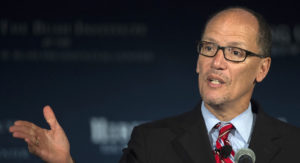 Criticism continues to mount over Volkswagen’s behavior in refusing to honor the decision of Chattanooga skilled trades employees to choose Local 42 for collective bargaining. This time the criticism came in Volkswagen’s back yard, when the widely-read German newspaper Die Welt published lengthy comments from U.S. Labor Secretary Thomas Perez over the company’s disregard for U.S. laws – both in the emissions cheating scandal and the defiance of NLRB orders regarding Chattanooga.

Perez expressed his strong disapproval of Volkswagen’s behavior, saying “it seems like they make one bad decision after another.” He noted that rather than apply common sense, the company seems to be getting advice from its lawyers to stall and delay. “Their [Volkswagen’s] current strategy might in the short run buy VW time in the courts,” Perez said, “but every day that passes adds another dent on the image of Volkswagen.”

Perez said he is puzzled as to why Volkswagen is prolonging the inevitable, when they must sit down and negotiate a collective bargaining agreement. “People will look at Volkswagen and see a company that cheated when it comes to emissions and now refuses to negotiate with its own employees. I do not think it is an image that you want to portray if you aim to increase your market share in America.”

You can view the original story (in German) as it appeared in Die Welt here, and read the English translation here.