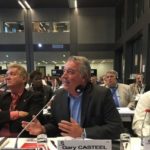 8/12/2016: Volkswagen workers around the world are united behind UAW Local 42. IndustriALL, the federation of auto worker unions from across the globe, called out Volkswagen for ignoring the democratic vote of maintenance employees here in Chattanooga. They took the unprecedented step of filing a formal complaint (see letter here)  against Volkswagen, under the Declaration on Social Rights and Industrial Relationships, which VW signed with IndustriALL and the Volkswagen Global Group Works Council in 2002. Volkswagen has never had a complaint filed against it in its history.

The IndustriALL action came after UAW Secretary-Treasurer Gary Casteel described the deceptive behavior of Volkswagen in opposing the December 2015 vote of maintenance workers. “The tricks and tactics in the south of the U.S. won’t remain there,” he said. “They will be coming to you soon.” The delegates noted that Volkswagen had hired a high-dollar “union avoidance” law firm to represent them and attempt to keep the maintenance employees tied up in court.

Volkswagen says they object to the separate vote for maintenance employees because it would “fracture” the workforce. But in a series of appeals court decisions from all across the U.S., separate bargaining units are found to be perfectly legal and the position taken by VW has been rejected.